Bill leads and oversees all Rowe Sanctuary programs on the 3,000-acre Sanctuary and has worked extensively on conservation of the Platte River for Sandhill Cranes, Whooping Cranes, and other wildlife. Previous positions included Assistant Director and Director of Conservation. Bill has a B.S. in wildlife biology.

As Operations Manager, Soncey oversees day-to-day operations of the Center and Sanctuary. She grew up in Colorado and has lived in Nebraska for several years moving here from Virginia to be closer to family. Soncey has earned a B. A. in Business Administration.

As Education Manager, Beka oversees all educational programming at the sanctuary. Such programs include school programs, summer camps, adult programs and monthly family programs. Beka received her Bachelor of Science in Biological Sciences with emphasis on biology and public outreach from Illinois State University. She has hands on experience in informal educational as an education intern at Sugar Grove Nature Center near Bloomington, IL. and working in a variety of education focused positions at the Saint Louis Zoo, including Early Childhood Instructor and most recently an Education Instructor.

Cody coordinates the conservation program on the sanctuary. He grew up in rural central Nebraska near Chapman. Cody has earned a B.S. in Biology and Environmental Studies. He has previous experience from the Lower Elkhorn Natural Resource District, the US Fish and Wildlife Service refuge system, and the Nebraska Game and Parks Commission.

Amanda assists in conservation planning, maintenance of long-term monitoring efforts, and habitat management at Rowe Sanctuary. Amanda grew up in South Dakota and is a graduate from the University of South Dakota where she studied conservation biology and sustainability. She spent three years researching the impacts of invasive plants on breeding birds in Missouri River riparian forests, and worked for the National Park Service and South Dakota Game, Fish and Parks. She is also a dedicated volunteer with Raptor Conservation Alliance.

Catherine is the Senior Coordinator of Center Operations. Catherine grew up in Houston, Texas, and has a B.S. in Ecology and Evolution from Trinity University. She has experience in prairie restoration, vegetation, and pollinator monitoring from working with the Texas Conservation Corps and Monarch Joint Venture.

Anne is the Senior Coordinator of Outreach for Rowe Sanctuary. She grew up on a farm close to Shickley, in south central Nebraska. Anne earned a B.A. in bible, religion and philosophy with a minor in women’s studies.

Sign up for our eNews to stay updated on all things Rowe Sanctuary including events, our conservation work, and so much more! 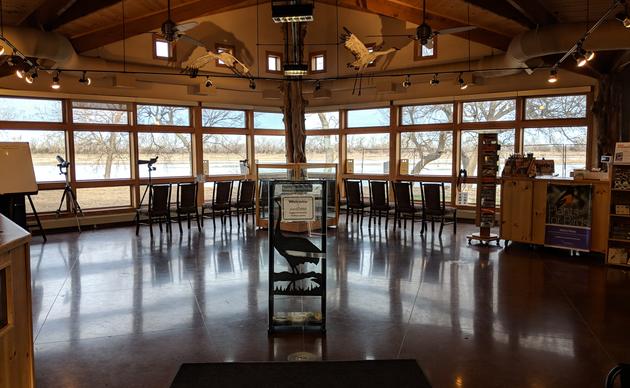